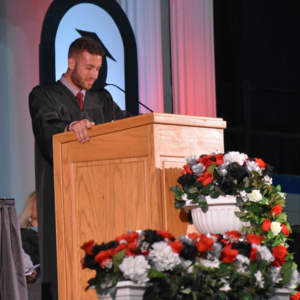 Fun facts about our EVHS Class of 2019 student-selected staff speaker, Mr. Sarratori.
1. Mr. Sarratori graduated from Eden Junior/ Senior High School in 2014, just a 20 minute drive from Buffalo, New York.
2. He attended Thiel College and graduated in 2018 with a double major in History and Secondary Education.
3. Favorite quotes: “Man must live on the summit to avoid the abyss.” – Abraham Joshua Heschel and
4. Before moving here he had never been West of the Mississippi River.
5. He loves to travel and has been to Spain, Canada, Mexico (3 times), Dominican Republic, Portugal, and Costa Rica.
6. Hiking and kayaking are his favorite things to do in Washington. Actually, he hiked three mountains in August before school started.
7. He loves to cook! Although not an expert,  he thinks it's fun to try new recipes and claims that, "There’s nothing better than grilling some steak for dinner!"
8. The Office is by far his favorite show and he has watched it all the way through about eleven times now. "It has definitely formed the foundation for most of my terrible jokes!" Game of Thrones is a close second that he loves and will miss it now that it is over!
Let's thank Mr. Sarratori for the impact he has had in creating positive experiences for our EVHS students!