Welcome to Junior ROTC at EVHS 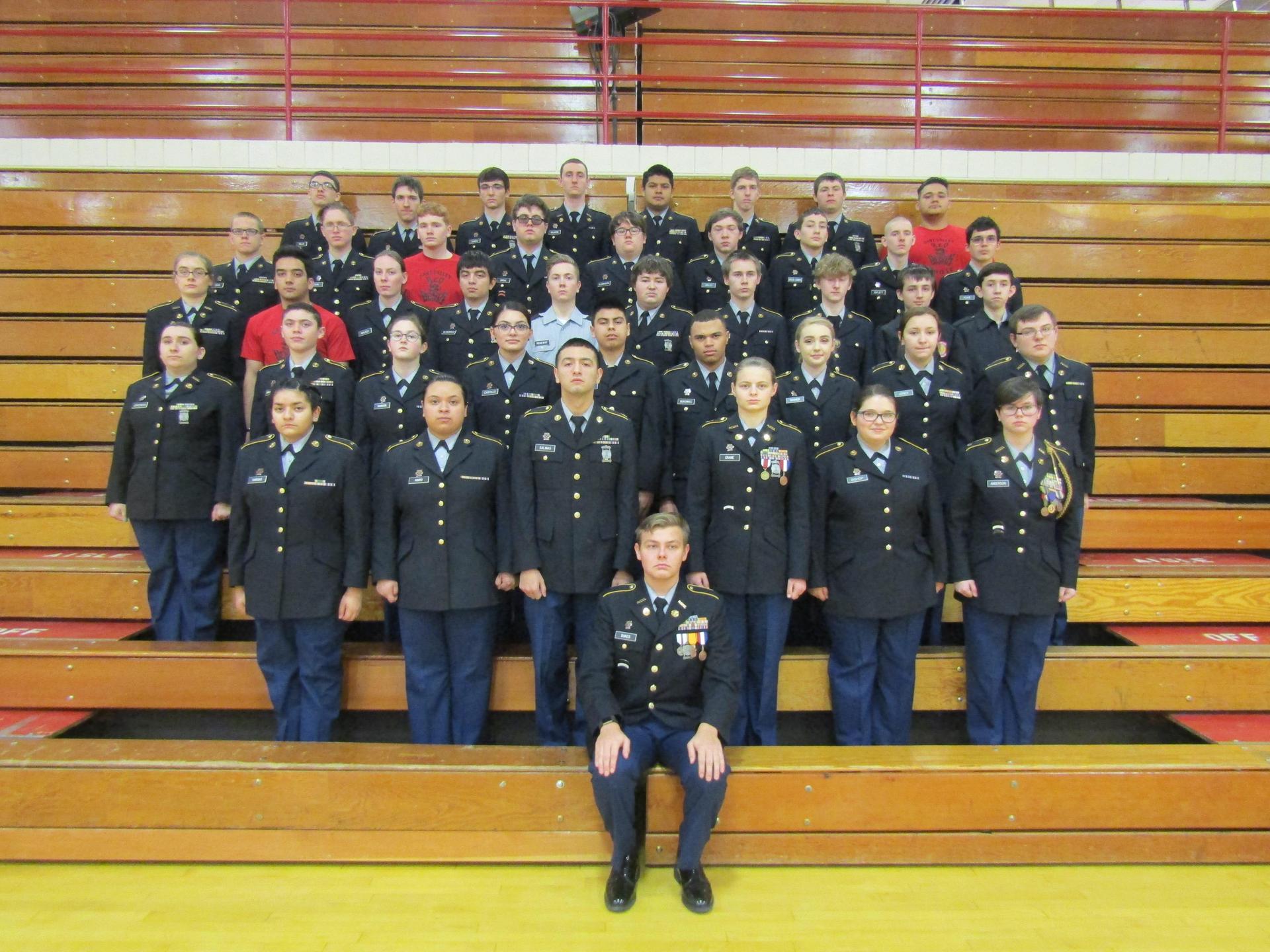 One of the Army’s biggest strategic challenges over the next few decades will be continuing to staff its all-volunteer force amid a shrinking population of capable and interested youth — but high school JROTC units could be part of the solution.

The Army has been “tearing apart” its recruitment data to figure out how to boost its accessions in an increasingly competitive job market. One of the solutions potentially on the horizon involves more focus on the Junior Reserve Officer Training Corps at high schools.

The service, which is trying to grow to 500,000 active-duty soldiers by 2028, has found that Americans at high schools with JROTC programs are more than twice as likely to enlist after graduation, according to Maj. Gen. John R. Evans, Jr., who helms Army Cadet Command.

“And you don’t have to even participate in the program," Evans told a crowd at an Association of the U.S. Army forum Wednesday. “The mere presence of the program at your high school has at least a corollary effect on your desire or your willingness or your propensity to serve your nation. So, pretty powerful data point there for us.”

“Army senior leaders are currently looking very hard at what we’re doing with Junior ROTC and trying to decide if we’ve got it right or if perhaps we need some more of this," Evans added.

However, there are always problems with expansion.

“Junior ROTC, and the senior programs to a little bit less of a degree, can be political footballs," Evans said. "Once you plant a Junior ROTC program somewhere, if it does not attrit of its own volition, you’re very unlikely to be able to shut it down, so it’s a sunk cost. So senior leaders want to be very deliberate about expanding.”

Army Cadet Command has oversight of the Army’s JROTC and college ROTC programs. Some cadets in even the regular ROTC program end up enlisting, as well, due to academic trouble or a change in career plans that would best be solved through a more immediate military career.

But Evans noted that his command is also interested in nurturing “world-class citizens,” especially at the high school level.

“Everybody where we’ve got programs loves them, from teachers to guidance counselors to superintendents to governors to members of Congress," he added.

The Army owns about half of the 3,400 Junior ROTC programs managed by the U.S. Defense Department. That means that roughly 305,000 kids are members of Army-specific JROTC programs.

JROTC may be an increasing focus for the service as it attempts to meet tough recruiting needs year-after-year. The Army failed to meet its 2018 goal of enlisting 76,500 soldiers, but was able to make the numbers this year after dropping the goal to 68,000 soldiers.

Army Cadet Command and Army Recruiting Command took a look at various data sets to identify strengths and weaknesses for the accessions enterprise at the behest of Secretary of the Army Ryan D. McCarthy.

“We found that somewhere between 20-25 percent of kids in Junior ROTC will go on to serve in the military somewhere,” Evans said. "They’ll either go to a service academy, they’ll matriculate into the senior ROTC program or they will enlist into one of the services.”

Even for those that don’t join the Army, or any other service, JROTC is a boon for the military, though.

“One of our biggest strategic challenges moving forward is being able to man the all-volunteer force,” Evans said. “So what we do by introducing young men and women to the Army culture in Junior ROTC ... is we demonstrate to them that this is a culture of purpose and meaning.”

For the 75-80 percent of high school students in JROTC who don’t enlist, the program still introduces them to the military and increases the chances that they will recommend or “influence” others to join in the future, according to Evans.

Wouldn’t it be great if there were a class at the high school where you can learn a lot, have fun doing it, gain some unique and valuable experiences, meet your Career and Technical Education (CTE), PE, Art*, World Language*, and/or Elective credit requirement, and all at no cost to you?  There is such a program at East Valley High School – The Army Junior Reserve Officer Training Corps (JROTC).

Let us give you the facts on this great leadership and character development program.

In addition to classroom academics, the JROTC program offers a variety of co-curricular (before and after school) activities:

What we expect from students in our program is discipline, respect, honor, hard work, commitment and teamwork. Students willing to embrace these qualities will do well in JROTC and anything else they attempt. If you are looking for a unique class that will help you have fun, meet positive people and become involved in our community as well as a program that will develop your academic, social, and leadership skills, then JROTC is for you. Please contact us should you have any questions.

*Depending on how you filled out your High School and Beyond Plan. Check with the JROTC department or your counselor for more information.

Understanding the History of JROTC

For those that are planning on going to a 4 year college after high school, why pay for your education out of your own pocket? There are scholarships available for all that join the military. Please select the links below to explore opportunities that will benefit your education.
ROTC programs
Scholarship Counseling

2019-2020 Course Listing
This year we offer the following courses
Leadership Education Training - This class has four levels, LET 1-4. These classes are designed to teach the values of citizenship, leadership, service to the community, personal responsibility, and give a sense of accomplishment, while instilling self-esteem, teamwork, and self-discipline. The program’s focus is reflected in its mission statement, “To Motivate Young People to be Better Citizens.” JROTC’s performance-based curriculum requires that cadets master the competencies, do the skills, apply the knowledge, and model or exhibit behaviors representing the desired attitudes. A custom-fitted uniform is worn once a week on the designated uniform day. There is no obligation to join the armed forces; however, satisfactory completion of two years can lead to advanced rank in the armed forces. College ROTC scholarships are available for outstanding students meeting college entrance requirements.
Rifle - This is a three year class, teaching Hunter's Safety and the safe handling of  firearms in addition to teaching the LET classes. Students that are in this class are required to attend and compete in at least 3 Drill Competitions as well as any Postal competitive shooting matches against other JROTC programs in the Cascade Mountain League.
This year we are offering a new course
Drill & Ceremony - This course is designed for the Cadets who are interested in competing in both the Varsity or Junior Varsity Drill and Color Guard Teams.  This class provides in-depth training in the art of regulation and exhibition drill.  The curriculum extends farther on this subject than you can learn in the Leadership, Education and Training (LET) JROTC class.  Cadets will learn to perform, teach, and evaluate regulation and exhibition drill. This class provides training with a competitive edge.   Each Cadet is at a different level of training and continues to strive to improve their skills through teaching, evaluating, and analyzing regulation and exhibition drill.